It has been a long time since my last trip to DC. I really didn’t have any expectations when I went, since I have been “stuck” as you all know from reading my posts (you have been reading my posts haven’t you??!!!) for a very long time. I had no clue what the game plan was going to be during my visit. No expectations is a good thing though, as you aren’t really going to leave your appointment with any feelings of disappointment or discouragement.

Friday was a very long day. In order to save money, Dave and I fly out of Boston in the morning, go to my appointment, and fly right back, then drive back home. Navigating through the airport is pretty tough, especially having our taxi drop us off at the wrong side of the airport. I certainly got my exercise in for the day. I did a lot better than my recent trip to Walmart however, as the lights aren’t nearly as bad, and there isn’t any weird toxic smells.

I was hoping for good weather, since it had just snowed again here in New Hampshire, and was happy that although it was suppose to rain, it would be 80 degrees out. YES! But, of course the weatherman lied and it was in the 50’s. That bastard. At least during our little walk to the doctors office it wasn’t pouring rain.

I left my appointment feeling like I was in a good place. We went through my notes about how I have been feeling, the plans of the implanted heart monitor, and my Lupron injection. I was very happy that my doctor was on board with everything, which was one of my worries. That is one big downfall of being treated by an army. One doctor says one thing, another says something completely different. Phew. We are all on the same page.

My LLMD’s belief about my heart issue is that it is possibly dysautonomia, or POTS. I did my standard mini check up, and my blood pressure was low. I have known in the past for my blood pressure to occasionally be low, but apparently I have more of a history of it being low. He gave me a prescription of midodrine, instead of the prescription that my general practitioner gave me, in hopes it will help with my feet and raise my blood pressure a bit. His thought is that I might actually get dizzier and more lightheaded with the general practitioner’s medication choice. From a Lyme standpoint, I take my LLMD’s opinion more heavily, so that is what I will take, and see if there is any improvement.

It was requested that I get a blood pressure cuff to keep track of it, and I will have to get on the ball to pick one up. I just dropped off my 18,000 (I may be exaggerating a bit) at the pharmacy and of course forgot, even though they are right in the front of the store in plain sight. Lyme brain.

This new medication will also help with my feet issues, with them being so blue with poor circulation. He explained to me when I get up and stand, the blood is still all pooled in my feet and not circulating around, so that will make my blood pressure lower and I will be symptomatic or have an arrhythmia. I suppose that makes sense.

My liver and spleen are now more enlarged than last time, and he thinks that Babesia is the culprit. I am on the maximum protocol he gives, and with just a teensy bit of tweaking, I will remain on the same treatment, in hopes that the Babesia will clear, my liver and spleen will go back to normal, and I will feel better. Same as always, I am still having a lot of neurological issues. That was a given.

I was kind of bummed that because my liver and spleen are enlarged, I cannot do a phone conference with my next appointment. It is really nice to save the money on travel. It will be summertime when I go back, and I am hoping that I will see big improvements over the next several months and be able to do some exploring while I am down there.

The next few months will basically be trial and error seeing if anything shows up on the heart monitor, how I react to the new medication, and if I can continue to kill those little buggers.

The LLMD believes that what happened with my Babesia relapse is that my tissues and brain were never healed to begin with when I had done nearly a year of Babesia treatment, and when I stopped the infection reactivated, and alongside my Lactoferrin and Xylitol protocol, everything went loose, and that is why everything came back and I had such a strong relapse.

He left me feeling good, that I was truly heard, and I am really hoping that all my ducks will be in a row, and things will fall into place. Being “stuck” is really getting old. I am sure there are a lot of you out there that are in the same boat.

My advice to you is to seek others opinions (you don’t even need to use that “L” word that so many doctors disagree with), and try to pinpoint symptoms. Seek out anyone really. Listen to another LLMD, an LLND, your GP, cardiologist, gynecologist, neurologist…. Sometimes it takes a fresh set of eyes to review your medical history and symptoms. This theory of mine seems to have been one of the best decisions I have made as I feel I am a step closer to getting this long, drawn out puzzle solved.

Wishing you all a good weekend!

Oh! Almost forgot my classic thumbs up pose at the Doctor’s office! 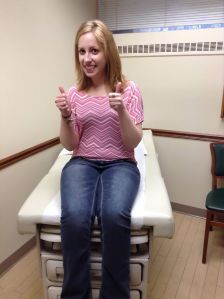